History and Land Use

The Rivanna River, originally named the River Anne honoring Queen Anne (1665-1714), is a tributary of the James River with an approximately 760 square mile watershed in the mountains, foothills and piedmont of Central Virginia. Before European settlement, the Rivanna River Basin was home to Native American people who created permanent settlements and cleared forest for agriculture, primarily in bottomlands along the major rivers. Additional forest was removed as fertility of farmed land declined while the old fields reverted to forest. With European settlement came more extensive forest clearance for agriculture.

Tobacco was the main crop for trade, but by 1820 wheat had replaced tobacco as the main cash crop in the Rivanna watershed. Forest clearance for agriculture continued during the nineteenth century with large plantations occupying much of the land near rivers and small farms replacing extensive areas of upland forest. (Rivanna River History, Nolting and Pence, 1996).

At the beginning of the twentieth century, most of Albemarle County and Fluvanna County was open farm land but during the first half of the century there was a decrease in farming, particularly in upland areas, resulting in a significant expansion of coverage by secondary-growth forest. According to the 2009 Rivanna Watershed and Vicinity Land Use/Land Cover Map, developed by RRBC and its partners using 2009 aerial imagery, 72.2% of the watershed is now covered by forest*, 22.8% is open land, 3.2% is impervious surface, and the remaining 2% is water, orchard and golf course. 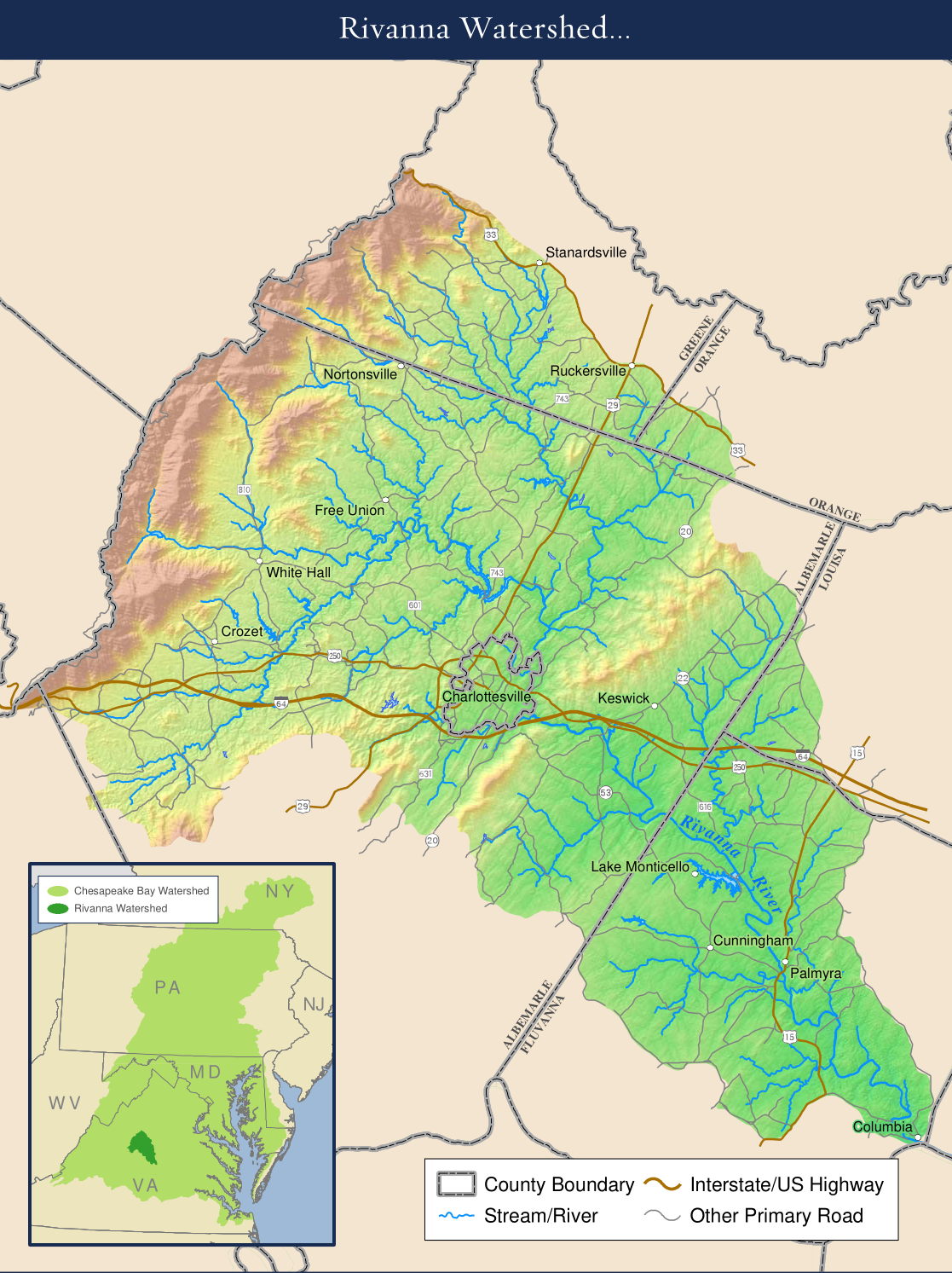 The Rivanna River Basin is comprised of ten sub-basins each draining a certain portion of the Rivanna watershed as follows (State of the Basin Report, TJPDC, 1998):

There are several major reservoirs in the Rivanna Basin constructed to provide storage for water supply, and several smaller lakes for recreation and a large number of farm ponds. The largest impoundments are:

Annual precipitation averages over 43 inches in the Rivanna basin with monthly averages ranging from 2.9 to 5.3 inches. However, stream flows are highly variable. At times, usually in late summer, even the larger streams in the basin may decline to a trickle or even run dry. The creeks and tributaries of the Rivanna are subject to very high peak flood flows and with continuing urbanization, and concomitant expansion of impervious areas, the flood potential will increase. USGS has four operational gauges in the Rivanna watershed that measure stream flow and flow height. These are the Mechums River gauge, the Moormans River gauge, the North Fork Rivanna gauge, and the Palmyra gauge.

However, development and land use pressures, both rural and urban, have resulted in many other stream segments that are not as healthy, and in many cases do not meet Virginia water quality standards.

Virginia’s Department of Environmental Quality administers the federal Clean Water Act, and enforces state laws to improve the quality of Virginia’s streams, rivers, bays and ground water for aquatic life, human health and other water uses. DEQ extensively tests Virginia’s rivers, lakes, and tidal waters for pollutants. Over 130 different pollutants are monitored annually to determine whether the waters can be used for swimming, fishing and drinking. The DEQ publishes lists of impaired segments of streams, lakes and estuaries that exhibit violations of water quality standards detailing the pollutants responsible for the violations and the causes and sources of the pollutants.

A number of stream segments in the Rivanna Basin have been found to be impaired (2010 Final 305(b)/303(d) Integrated Report), most due to excess pollution from bacteria or non-point source pollution from stormwater runoff or excess sediment. These impaired waters are being studied by Virginia DEQ and local stakeholders in preparation for developing pollution clean-up plans (IPs, or Implementation Plans).

The Rivanna community is fortunate to have the community-based nonprofit and monitoring program, Rivanna Conservation Alliance (RCA), which has been active since 2016 obtaining quality data on the health of Rivanna streams, however Rivanna efforts extends prior through Streamwatch and the Rivanna Conservation Society, which eventually merged to form RCA. Extensive sampling from 2019-2021 reports from RCA estimate 4% of the basin as very good, 14% good, 64% fair, 16% poor, and 2% very poor. The Rivanna remains on the list of impaired waters according to the Virginia TMDL. 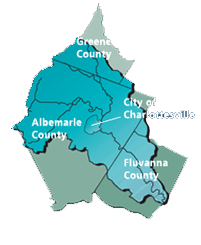 The Commission has representatives from the following jurisdictions and organizations